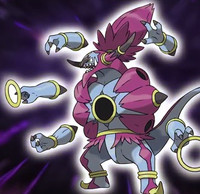 Mythical Pokémon Hoopa is getting ready to star in the latest Pokémon feature, and it also has a newly-revealed form coming to Pokémon Omega Ruby and Pokémon Alpha Sapphire. The Pokémon Company International unveiled Hoopa Unbound earlier today, marking the 720th entry in the Pokédex.

Here's some info and stats, with more to be revealed soon.

Hoopa Unbound is the new and truest form of Hoopa, which until now has had its power sealed away. The rings Hoopa Unbound carries have the power to bend dimensions and are said to allow it to seize anything in the world. After its transformation, Hoopa Unbound is far larger than it was in its previous form, with six huge arms and a greater number of its signature dimension-bending rings.