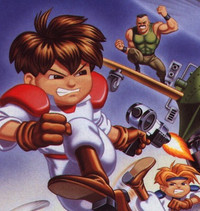 Sega's series of impressive 3D Classics are coming back for more this summer. The enhanced 3D remasters continue with 3D Streets of Rage 2 in July, followed by 3D Gunstar Heroes in August and 3D Sonic the Hedgehog 2 in September.

Prior to that batch you'll be able to purchase 3D Fantasy Zone II on April 16 and 3D Thunder Blade on May 14. Like prior releases, games in the Sega 3D Classics series are priced at $5.99/€4.99/£4.49 and available via the Nintendo eShop on 3DS. They have a bunch of nice extras and are definitely recommended if you have a fondness for the classics.