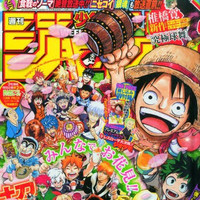 It looks like Weekly Shonen Jump is about to go into another eventful period. Next week's issue 21 has a Nisekoi cover/color page with One Piece and Bleach absent. That might be the calm before the storm. The following is a Golden Week 22/23 double issue with the cover shared by the returning One Piece and Naruto Gaiden - The Seventh Hokage and the Scarlet Spring Month. After that, things get interesting.

As for what they're replacing... while the recent Black Clover has been well received, speculation based on their placement in the magazine/ranking suggest that Cyborg Roggy, Takujou no Ageha and Gakkyu Houtei (which also runs in the English Jump) might not be long for this world.