"J-Stars Victory VS+" Dated for Europe and the Americas 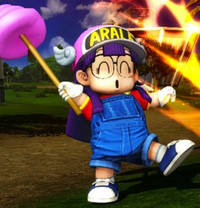 It's amazing enough that we're getting J-Stars Victory VS+ in the west, but the fact that the roster will remain completely intact makes it that much more so. The 45th anniversary fighter was announced for western release last year, and Bandai Namco confirmed the original Japanese voice-overs back in December. Now we have something more concrete than the initial summer release window, though, with J-Stars Victory VS+ set to attack Europe on June 26, followed by the Americas on June 30.

Platforms include PlayStation 3 and PlayStation 4, as well as a digital-only release on PS Vita.

One of the new features in VS+ is an arcade mode, which was added exclusively for the west. The PlayStation 4 version features upscaled graphics, but the textures and frame rate remain the same as the PlayStation 3 version. Bandai Namco also has a limited edition planned, as well as pre-order bonuses like the J-Stars Victory VS+ compendium.

VIDEO: "J-Stars Victory VS+" Gets A New Trailer Showing Off Its "Fighting Stars"