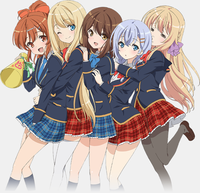 Girl Friend BETA started out as a smartphone game that CyberAgent launched on iOS and Android in 2012. It went on to get a handful of manga adaptations—as well as a TV anime directed by Naotaka Hayashi (Morita-san wa Mukuchi, episodes of Birdy the Mighty: Decode and Bokurano) at Silver Link—and now it's on its way to PS Vita in Japan this summer.

Revealed in this week's issue of Famitsu magazine, Girl Friend BETA: Summer Vacation Spent with You is a love adventure game that offers up eight potential characters to woo. The romantic summer outing will be available in both a standard version and a limited edition box when it launches.