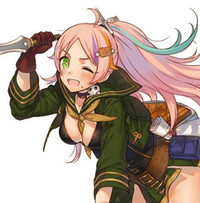 Luminous Arc Infinity is bringing its strategy-RPG stylings to PS Vita in Japan on August 6, complete with 12 heroines with their own special moves, attributes, and more. Marvelous has new trailers for three of the heroines, including Rana, Hisoka, and Kasumi.

Rana—voiced by Ayaka Ohashi (Fleur Blanc in EUREKA SEVEN AO)—is easily misunderstood and not very attentive of her surroundings, but she's thoughtful and full of questions.

Hisoka—voiced by Ayane Sakura (Cocoa Hoto in Is the order a rabbit?)—is talkative, attentive, and tolerant.

Kasumi—voiced by Aya Uchida (Kotori Minami in Love Live! School Idol Project)—is calm, graceful, and sociable, but she has her air-headed moments. She hopes to be an archaeologist some day.