Character designed by PFALZ and voiced by Kunihiko Yasui 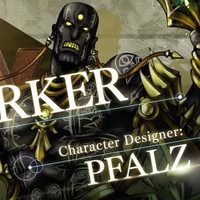 2015 smartphone (iOS/Android) game Fate/Grand Order features the battle for the Holy Grail across seven time periods with scenario by TYPE-MOON founder Kinoko Nasu and a very impressive collection of artists. It'll feature Fate/stay nighter's Heracles Berserker, Fate/zero's Lancelot Berserker, a new Berserker with connections to Fate/Extra's Saber, and, the subject of the latest promo, another new Berserker with implied connections to Fate/zero's Rider.

This Berserk is designed by PFALZ, a veteran of the Nasu-verse whose work included the Vimana: Throne of the Heaven-soaring King in Fate/zero, and voiced by Kunihiko Yasui (Iori Yagami in The King of Fighters ).