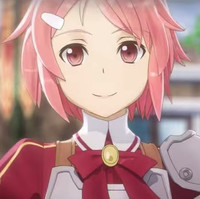 Sword Art Online Re: Hollow Fragment is coming to PS4 as a digital download this summer. The enhanced version, which is also coming to Japan, features graphical improvements and other features that will be announced later. Anyone who already has the PS Vita version will be able to transfer certain items and unlock DLC at some point down the line.

Sword Art Online: Lost Song is coming to PlayStation 4 and PS Vita in the west both at retail and as a digital download this fall. Available subtitles include English, French, Italian, German, and Spanish.

Here's a Japanese PS4 trailer for both Re: Hollow Fragment and Lost Song:

Meanwhile, the Japanese version of Sword Art Online: Lost Song is getting a big update that adds in new playable characters, new episodes, new quests, and a new PvP event. The latest characters to join in on the action are Seven and Lux, and there will be new episodes featuring Seven and Rain. You can see a preview of the content in the promo below.