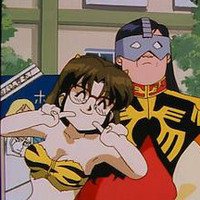 Following their successful Bubblegum Crisis Kickstarter, Animeigo is now preparing to laugh a crowdfunding campaign to support a new release of Otaku no Video, which they describe as an" outrageous mockumentary that combines the superb animation that made Gainax one of Japan's best-loved animation studios with truly strange interviews with 'real fan"'. Sit back and enjoy this thinly-disguised alternate history of Gainax, as a small band of Otaku set out to 'Otakunize; the entire human race." This will be launching Tuesday, June 2nd and to prepare posted a pair of videos.

The #otakunovideo kickstarter will go live at 10AM ET on Tuesday, June 2nd. https://t.co/At0QZukpCz

To whet your appetite, here is the #otakunovideo “Cosplay Exposé” interview segment: https://t.co/Uo5ZL4okH8

The draft is online with tiers that start at $25 for digital material and $25 for a Blu-ray release.

The original comedy OVA series was released in 1991, depicting the real otaku life in the early 1980s Japan. And its live-action segments "A Portrait of an Otaku" directed/filmed by Shinji Higuchi (Japan Sinks, Attack on Titan live-action films) featured the staff of Gainax at the time. It was later released by AnimEigo in the United States, and it is said that it helped to spread the recognition of the word "Otaku" through the fan community in the West.