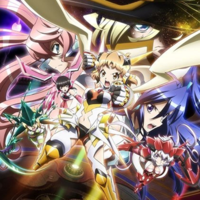 The official website for the upcoming TV anime third season Symphogear GX has updated with a new main visual, announcing its premiere schedule in Japan and six additional voice cast. It was already announced that Nana Mizuki performs its OP song "Exterminate," while Ayahi Takagaki sings ED song "Rebirth-day." All of the main cast, including Aoi Yuuki as Hibiki Tachibana, Mizuki as Tsubasa Kazanari and Takagaki as Chris Yukine, reprise their roles.

Carol Malus Dienheim: Inori Minase (Hestia in Is It Wrong to Try to Pick Up Girls in a Dungeon?)

Teaser for the third season