Sequel is in the works for PlayStation 4, Xbox One, and PC 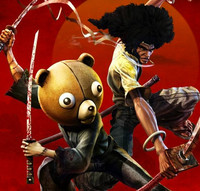 It was almost a year ago that publisher Versus Evil (Banner Saga) and developer Redacted Studios first announced plans for a new Afro Samurai game. Afro Samurai 2: Revenge of Kuma is coming to PlayStation 4, Xbox One, and PC this summer, and the official reveal trailer is here in advance of next week's E3 showing.

Afro Samurai 2 follows Kuma as he sets off on a violent revenge mission aimed directly at Afro, who he blames for the death of all his loved ones.