The presentation ceremony was held at Tokyo One Piece Tower 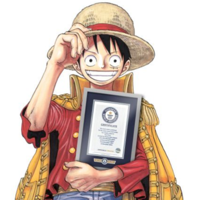 It is officially announced today that Eiichiro Oda's One Piece manga series is listed in Guinness World Records for "The most copies published for the same comic book series by a single author" with 320,866,000 copies printed (as of the end of December 2014). The first volume of the manga was published in Japan in December 1997, and currently 77 volumes are available.

The presentation ceremony was held at Tokyo One Piece Tower with the cosplay performers for its attractions today on June 15. The author Oda, who couldn't make it to the event, gave his comment via Weekly Shonen Jump's editor in chief Yoshihisa Heishi, "Thank you very much for certification for the Guinness World Record. Though manga is just entertainment for killing time, I am happy to have heard from people that they were able to make friends, a boyfriend or girlfriend, thanks to the topics about One Piece. I feel the number of this record suggests the possibility to connect the people with the same number. I will not forget the gratitude to the predecessors and supporters in the manga industry, as well

as my readers, and I will keep working on the works that will not shame the record."