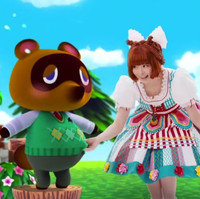 Japanese idol singer Kyary Pamyu Pamyu previously worked with Nintendo to promote New Nintendo 3DS, and now she's in the Animal Crossing world mixing it up with the likes of Isabelle and the ruthless Tom Nook.

With new entries in the series looming, 2012's Animal Crossing: New Leaf is on sale for ¥3,000 ($24) in the Japanese eShop. See the results of the new promotion, and marvel at that shameless Nook belly pinch, below.