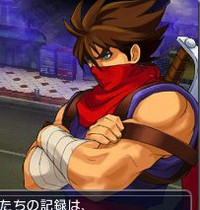 The limited edition is the "Original Game Sound Edition," priced at ¥9,980 ($82). It comes with a special Namco X Capcom 10th anniversary 3DS theme, DLC for a "Valkyrie no Boken: Toki no Kagi Densetsu with Xiaomu" arrangement, and the ability to play the game while jamming to over 60 tracks from the first Project X Zone.

Those who pick up Project X Zone 2 at or around launch will get a challenge map called The Girl from 10 Years Ago, with "Black Hot Pants" offered as a bonus for completing it. Other first-print bonuses include a special 3DS theme.

Tags
project x zone, project x zone 2
« Previous Post
New "Vampire Hunter D" Anime Planned
Next Post »
FEATURE: Aniwords – So, Is it Wrong to Try to Pick Up Girls in a Dungeon or Not?
Other Top News
4 Comments
Sort by: