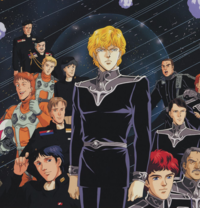 Before it was an anime, Legend of the Galactic Heroes started off as a series of science fiction novels by Yoshiki Tanaka. During Viz Media's Anime Expo 2015 panel, the company announced plans to bring the novels to North America.

Right now they have the first three scheduled, but they'll need fan support to get all ten out there.

LEGEND OF THE GALACTIC HEROES v2, Ambition, and v3 Endurance, will also appear in 2016. We're going to binge-publish!