2015 Animator Dormitory projects sought to raise $15,000 in the next two months for more dormitory facilities 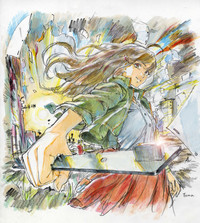 According to a 2009 survey, young animators make around 90,000 yen per month ($740), while the industry is largely located in the expensive districts of Tokyo. Following the success of last year's, a second crowdfunding campaign launched in May to help foster new generations of anime creators with the establishment of affordable dormitories. This week, the effort wrapped up having succeeded in raising $780 above its $15,000 target of funds for setting up more dormitory facilities that animators who are new to the industry can use for 30,000JPY per month (including utility expenses).

The animators who get to use the [Starting Out Animators’ Dormitory] will also get chances for social exchanges beyond the boundaries of companies, and also receive technical support for illustrations and drawing. Currently, they are supporting 2 starting out animators at the dorm. For this project, they aim to expand the dorm facility up to 2 times the current scale.