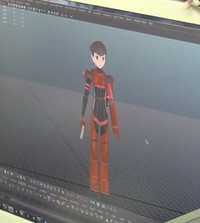 A few days ago a runtime extension was announced for Studio 4ºC's anime side of the two-pronged Red Ash project. Following not too far behind is an update on the Mega Man Legends-style game, which is coming from Keiji Inafune and the folks at Comcept.

It should be interesting to see the final tally on this campaign. It will probably be funded in time, lightly gliding past its $800,000 goal with a bit of time to spare.