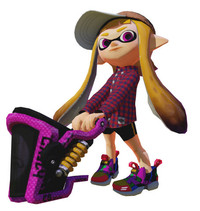 Nintendo detailed a major Splatoon update this morning, with the latest free offering set for August 5. This one will introduce two new matchmaking modes, new weapon types, a level cap increase, and over 40 pieces of new gear.

The new matchmaking options are Squad Battle and Private Battle. The former lets players participate in Ranked Battle rule sets with friends, as opposed to being put on teams with other randomly selected players. Private Battle will let friends be a kid now and a squid now in private, customizable matches.

The update pushes the level cap in both Regular Battle and Ranked Battle modes from 20 to 50, and players will be able to reach rank S and S+.

New weapon types available with the update include the bucket-like Slosher and the Gatling-style Splatling. The Slosher hurls ink straight ahead at impressive range, and the angle can be adjusted to hit opponents high up or on the other side of a wall. The Splatling can charge blasts of ink, with the maximum charge unleashing the weapon's full potential. They join over 40 pieces of gear, from leather jacket to sushi chef outfit, that will be available in the in-game shops.