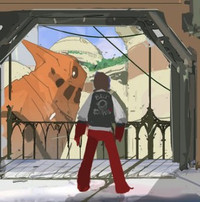 Keiji Inafune and Comcept's Mega Man Legends-style Red Ash: The Indelible Legend doesn't look like it will be hitting its $800,000 goal. It's not impossible, but there's quite a ways to go with just four days left. It doesn't really matter, though, because the game has been fully funded for development thanks to the help of Chinese digital entertainment company FUZE Entertainment.

This means that Red Ash is officially in the works for PC along with ports to PlayStation 4 and Xbox One. Comcept will retain the rights to the property, as well as "rights to creative discretion and decisions in game development," but what about the Kickstarter? According to the announcement, the Kickstarter campaign will 100% go toward more content. Comcept urges fans to continue funding the game, considering each pledge another push toward stretch goals.

The update isn't very clear about what those stretch goals will be, and it seems Red Ash is currently caught up in the action of behind-the-scenes deals and other details. Does this change your opinion of funding Red Ash, or are you just excited to see it officially enter development regardless of how well the Kickstarter does?