Next game hits PS Vita in Japan sometime in 2016 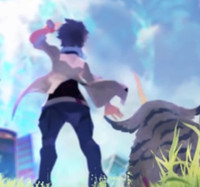 Digimon World: Next Order was announced for PS Vita earlier this month, and it's set to launch in Japan sometime next year. Bandai Namco followed that up with the first teaser, showing bits of the adventure's gameplay and its characters.

Utawarerumono Goes Full Board Game in Dokapon UP! Mugen no Roulette Opening Movie