On the bright side, MGSV's PC release date moved to line up with consoles 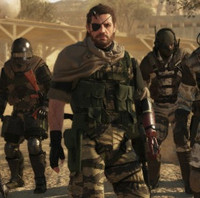 If you were looking forward to playing Metal Gear Online when Metal Gear Solid V: The Phantom Pain launches on September 1, you'll have to push that excitement back a bit. Konami announced a delay for the online component of Hideo Kojima's massive new game, lining MGO up for consoles on October 6, followed by PC in January 2016.

On the bright side, those planning to pick up the PC version of Metal Gear Solid V will now be able to do so alongside console owners, because the PC release has been moved up from September 15 to September 1. MGSV on PC supports 4K resolution, with custom MP3 soundtrack support to come later. Pre-orders include a Venom Snake emblem and Mother Base Staff DLC, as well as a behind-the-scenes video and a copy of Metal Gear Solid V: Ground Zeroes.