Chief of Studio Ghibli International Confirms English Dubs for "Only Yesterday" and "Ronja, The Robber’s Daughter" 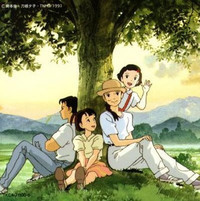 Ghibli International recently Tweeted about being in LA to do some English dubbing. This led enterprising fans to check out what Geoffrey Wexler, the chief of Studio Ghibli International is up to. This Linkedin confirms localization for Goro Miyazaki's, the son of Hayao, 3DCG adaptation of Swedish author Astrid Lindgren's children's fantasy novel Ronia the Robber's Daughter, plans for which were previously revealed. Along with this was a listing for Only Yesterday.

Sweltering in Tokyo... Heading to LA (nicely chilly recording studios!) this weekend for recording with our good friends at #studiopolis.

The 1991 Only Yesterday anime movie by Studio Ghibli co-founder Isao Takahata's (Grave of Fireflies, Pom Poko, My Neighbor the Yamada) is known for being unknown in North America, in that it's the only Studio Ghibli theatrical movie not released in the region.  (Ghibli's TV movie Ocean Waves is missing too.)  An earlier dub ran on Turner Classic Movies' 2006 Ghibli retrospective and a release was scheduled for a DVD before Disney reshuffled their Ghibli DVD release plans.

The semi-autobiographical Omohide Poro Poro follows a 27 year old woman who revisits her childhood as she breaks from her busy Tokyo based life to travel to a rural harvest.