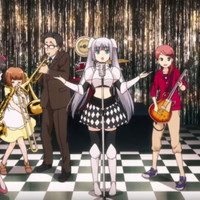 King Records have posted the music videos for Miss Monochrome's "Black or White" and "Step by Step!," which serve as opening and closings for the second season of Yui Horie's character's anime. The two will be featured on her new album, Black or White, due October 7th.