Action game is currently in the works for PS3, PS4, and PS Vita 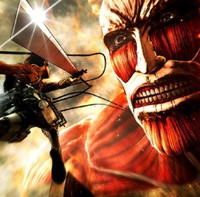 A Dengeki interview with producer Hisashi Koinuma revealed some more information on the upcoming Attack on Titan action game from Koei Tecmo and Dynasty Warriors developer Omega Force. According to Koinuma, the project kicked off around the end of 2013/beginning of 2014, and in in development with the PlayStation 4 as lead console.

This is a change-up from the way things have worked in the past, with PlayStation 3 typically the base console during development. Koinuma also revealed that the game will involve both cooperating with and sacrificing allies, and will let players move freely around the world. Omega Force is placing special attention on the feeling players get from using the 3D Maneuver Gear, and while anyone will be able to use the basic controls to take down Titans, it will take a skilled player to destroy them swiftly and stylishly.

The story of the Attack on Titan game will follow that of the manga and anime, starting from the beginning, though it's currently a secret as to whether or not that will involve playing as Eren Jaeger. Series creator Hajime Isayama has provided opinions and feedback during the process.

Attack on Titan is currently in the works for PlayStation 3, PlayStation 4, and PS Vita, with a release in Japan, North America, and Europe set for sometime in 2016.