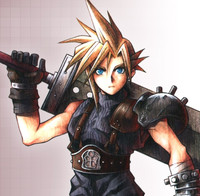 It's going to be a while before any of us get to play the full Final Fantasy VII remake, so I suppose we might as well play the original again on another device. Square Enix announced that the beloved RPG is hitting iOS today, and will be available once the Apple Store updates.

Final Fantasy VII on iOS is a port of the PC version, with added touch controls and an option to turn off random encounters. Square Enix set the original launch trailer to private a while ago, but here's another from EurogamerPortugal.