"Knights of Sidonia" Manga Comes to an End on September 25

Final chapter to appear in November issue of Afternoon magazine 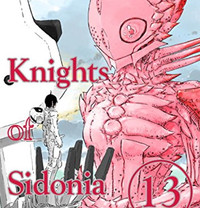 Tsutomu Nihei's Knights of Sidonia manga is getting ready to come to an end. The series kicked off in 2009, and its ending is set to run in the November issue of Kodansha's Afternoon magazine, which hits shelves on September 25 in Japan.

Knights of Sidonia has been adapted into a two-season anime series that streams on Netflix and is licensed by Sentai Filmworks, as well as a compilation anime film that covers the first season. Vertical Comics publishes the manga in North America, and volume 14 will arrive in English around the same time Nihei's manga is concluding in Afternoon.

"BLAME!" and "Knights of Sidonia" Take Over NicoNico for Double-Barreled Announcement