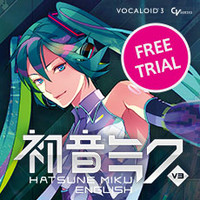 Opening August 26th and running through October 19th, The Hatsune Miku Expo tour is hosting an international songwriting competition. They are looking for new original tracks sung by Miku and the song chosen to be the Grand Prize will be performed by Miku at a future Hatsune Miku Expo concert. In celebration of this contest, SonicWire will be releasing a two-week trial version of Hatsune Miku V3 English.

Contest prizes
Grand Prize × 1
Your song will be performed by Miku at a future Miku Expo concert!
100,000 JPY worth of products from SONICWIRE
A pair of tickets to MIKU EXPO concert where the winning entry will be performed and an opportunity to take a commemorative picture on stage with Hatsune Miku (travel expenses are not covered).
Runner-ups × 2
30,000 JPY worth of products from SONICWIRE
Submission rules