Sequel is coming to PlayStation 4, Xbox One, and PC 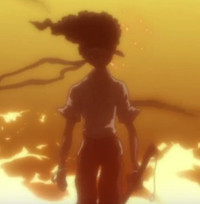 Amazingly, the saga of Afro Samurai is set to continue in Afro Samurai 2: Revenge of Kuma on PlayStation 4, Xbox One, and PC. The action game was revealed last June, with another preview following a year later at E3 2015, and now we have an interview with the developer. Redacted Studios' David Robinson and writer Jim DeFelice (American Sniper co-author) talk story, music, RZA, and more in the video below.