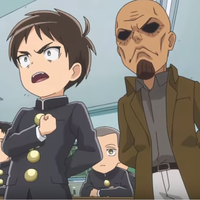 A new preview video for Attack on Titan: Junior High - a parody spin-off TV anime that reimagines the cast of Hajime Isayama's Attack on Titan manga and anime as "normal" junior high school students - has been released. The series looks to be about as wacky as one would expect.

Attack on Titan: Junior High hits Japanese airwaves on October 03, 2015, on MBS. It is based on the manga of the same name by Saki Nakagawa, and it features direction by Yoshihide Ibata and animation by Production I.G.