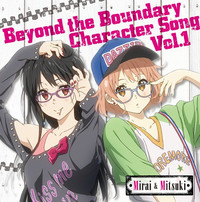 Sentai Filmworks has DVD, Blu-ray and Collector's Editions releases of Kyoto Animation's Beyond the Boundary scheduled for October 13th. In anticipation of the release, they've started introducing the English dub cast, which has now built up to Krystal LaPorte as Mirai Kuriyama, blood manipulator and last surviving member of her clan.

The previous introduction of principal characters has included

Clint Bickham as lover of girls with glasses, Akihito Kanbara.

Before that was Monica Rial as second year high school student Mitsuki Nase.

HIDIVE To Stream "The Beyond the Boundary" Anime Movies