Demo version announced for September 22 in the Americas 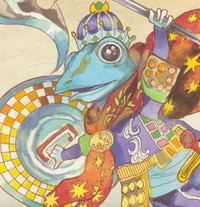 Atlus swooped in with some more news and footage of The Legend of Legacy, which is coming to Nintendo 3DS in the Americas on October 13. Prior to that, though, you'll be able to try it out, because a demo is set to hit the Nintendo eShop on September 22. The demo version will include the prologue and the first two dungeons, and save files will transfer to the full game.

In related news, the final three main characters have been revealed in the latest trailer. One of them is a FROG PRINCE, which is a major selling point, personally.

The official descriptions of each: