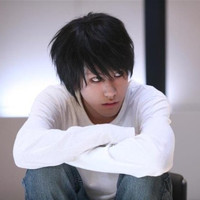 The release of the new movie coincides with the 10th anniversary of the 2 live-action Death Note films directed by Shusuke Kaneko that were released in 2006. The new film we be directed by Shinsuke Sato (Gantz live-action, Oblivion Island: Haruka and the Magic Mirror), and it will be a sequel to the earlier films. The premise of the film centers around cyber-terrorism and the idea that only 6 "death note" books can simultaneously exist on Earth at a time.