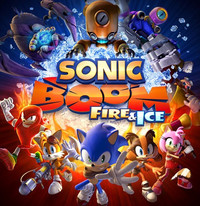 There were surely some fans of the Sonic Boom games, and those who count themselves as such will no doubt be dismayed to learn the Nintendo 3DS follow-up has been pushed back into next year.

Sega announced the Sonic Boom: Fire & Ice delay on its official blog, citing the need for more time and polish. On the bright side, moving Fire & Ice from 2015 to 2016 will give the developers the opportunity to make it a "stronger, more enjoyable experience."