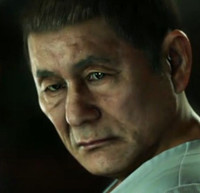 One of the best things Sega has revealed so far about Yakuza 6 is that it will feature a character played by non other than actor/director/comedian Takeshi Kitano, also known as Beat Takeshi. Known for helming a bunch of acclaimed yakuza films himself—many will also remember him from his role as head instructor Kitano in Battle Royale—Beat Takeshi is a no-brainer inclusion, and you can see the first footage of him from the latest Sega-nama Niconico livestream below.

This could be the next best Beat Takeshi-related video game moment, second only to Shinya Arino playing through his Famicom game, Takeshi no Chousenjou, to kick off the incredible Game Center CX series.