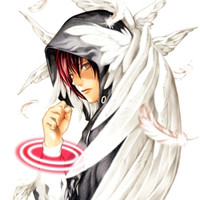 The 44th issue of Weekly Shonen Jump has also announced that a serialization of a new manga series Platinum End by Tsugumi Ohba (story) and Takeshi Obata (art) will brgin in the next December 2015 issue of the Jump Square monthly magazine to be published on November 4. The two have been well knonwn for their mega hit collaboration works Death Note (2003-2006) and Bakuman. (208-2012). This is their first collaboration work in three and a half years since Bakuman. ended in April 2012.

According to the brief description, the story centers on Mirai Kakehashi, a boy who can't find a hope in living, and tells a story between a human and an angel. The first eight pages of its first chapter will be previewed in the next 45th issue of Weekly Shonen Jump to be released on October 5.