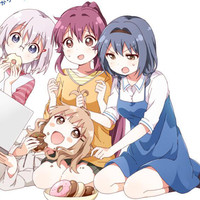 As with the Nachuyachumi! OVA, Recently My Sister's Hiroyuki Hata helms the project at TYO Animation rather than the earlier TV series' Masahiko Ohta at Dogakobo. Hata is also writing, along with manga author Makoto Fukami. rather than the OVA's Michiko Yokote. The OVA's Motohiro Taniguchi handles character design and animation direction.