Gaijinworks release is set for this fall 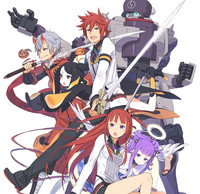 Gaijinworks has an extended preview up for the English release of PSP RPG Summon Night 5, adding up to just a little over 25 minutes of gameplay footage. The video features event and battle samples from "Arca's character path with Kagerou as her Cross," which is one combination of the two lead characters and four Crosses that can be chosen. Watch the early Chapter 2 action below.

The description notes that a typo in the text has already been fixed, so Gaijinworks is aware of some of the issues. One of the commenters noticed that Japanese cutscene voices were missing, and Gaijinworks had the following to say:

The budget on this game was far too small to afford licensing for voices and/or dubbing.  We need to get sales into the mid 20k range before that can happen.  We'll get there, but we need to grow the fanbase to make that happen.

(But at least we were able to keep the battle voices and some spot voice here and there.)

Summon Night 5 is due out this fall.

"Summon Night 6" Gets a Limited Edition Version in Japan