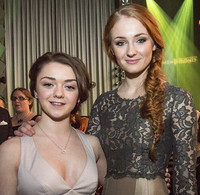 News for the Pacific Rim sequel was mixed this week. Variety noted that Universal Pictures removed the feature from its release calendar, but insisted that it is still happening. A statement from Universal and Legendary Entertainment, the film’s primary financial backer, said that while the film is being delayed indefinitely, the extra time would be used to ensure that the follow-up is “the vanguard, fully-immersive experience that the franchise deserves.  Meanwhile, director Guillermo del Toro talked up the project, mentioning some dream-casting of Maisie Williams (Game of Thrones' Arya Stark).

Had lunch with Maisie Williams yesterday. Remarkable. Dammit- if PR2 happens, that girl is getting a Jaeger.

@witchnowz My ass is, sadly, in need of financial support. Its movement alone doesn't cover the budget.

PART 3: Well-known in Japan but not everywhere. pic.twitter.com/TR0ck8M5Nt