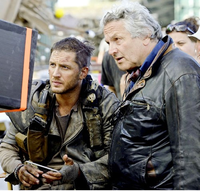 Hot off the success of Fury Road, Mad Max series director George Miller is being linked to a lot of big Hollywood projects. Apparently, given time constraints, the long-in-development live-action adaptation of Katsuhiro Otomo's sci-fi classic Akira will not be one of them. Talking to Yahoo Movies UK, Miller explained his relationship with the project and the original work.

“There was talk of it [the live action ‘Akira’],” he said to Yahoo Movies UK, “But I’ve got so many things on my dance card, I don’t have the time to do everything.”

“I’m a huge fan of anime and the precision of that and to some degree Manga, even though I don’t read Japanese, but just the aesthetic of it. So ‘Akira’ might have been one of the many movies but it certainly wasn’t one that directly influenced ‘Mad Max’.”

via Yahoo Movies UK and @MadmanFilms