Fighter hits PS3 and PS4 in Japan on December 10, North America this winter 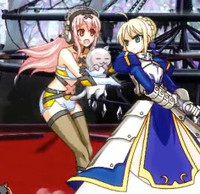 Marvelous is back with more super-short clips for Nitroplus Blasterz: Heroines Infinite Duel, which hits PlayStation 3 and PlayStation 4 in Japan on December 10, followed by a winter launch in North America. Watch the playable Saber and Sonico in action, followed by a look at a couple partner characters, including Carol from Guilty Crown: Lost Christmas and Supika from Star Mine Girl.