VIDEO: "Tales of Zestiria" Launches in the Americas with a New Trailer 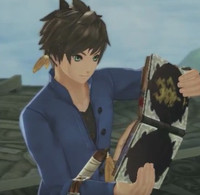 With Tales of Zestiria now available to pick up on PlayStation 3, PlayStation 4, and PC, Bandai Namco is here to promote the release with an official launch trailer.

Players will be able to download the "Alisha's Conviction" epilogue chapter DLC for free for the first 30 days after release. Once the promotion ends it will be available at its regular price of $9.99.

In TALES OF ZESTIRIA an unseen evil force known as Malevolence is spreading across the land, corrupting the world, and causing humanity to falter.  Players will embark on an epic journey as Sorey, a young pure-hearted adventurer whose destiny is to become The Shepherd, an individual of great power who can banish Malevolence. Does Sorey have the courage and heart to wield this extraordinary responsibility for good, or will he fall prey to the evils of its power?