Comcept's platformer hits consoles and PC in the west in February 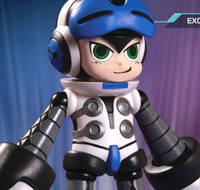 Mighty No. 9 has experienced its share of ups and downs since its initial success on Kickstarter, and USgamer's Jeremy Parish recently sat down with Keiji Inafune to discuss all that and more. One of the questions brought up the fact that third-party amiibo are now possible, and Inafune responded positively to the suggestion of doing something like that for Mighty No. 9.

"That's definitely an option for us, and if we have the opportunity to do it, then we'll definitely take the chance," Inafune said, adding that they'll have to look into it since they've seen how many people chose Nintendo hardware when they ran a platform survey.

First the game itself has to come out, so we'll see if Comcept and Inafune get around to working on the amiibo side of things. Mighty No. 9 is currently set for a February 2016 launch on consoles and PC in the west.

Be sure to read the full interview at USgamer for more insight into Mighty No. 9's development.

Note: Thumbnail is from the figure that comes with the signature edition