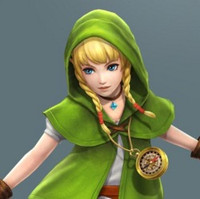 Nintendo is finally debuting its female Link, dubbed Linkle, as a playable character in Hyrule Warriors Legends. Zelda fans previously saw concept art for Linkle in a Hyrule Warriors art book, and now you'll be able to fight the enemy mobs as her in the new version of the Musou-style game.

See Linkle in action in the Nintendo Direct excerpt below: