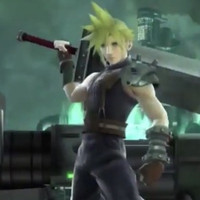 Nintendo closed out its first Nintendo Direct in months with a surprise addition to the Super Smash Bros. roster. The latest character to join the lineup is none other than Cloud from Final Fantasy VII.

The trailer shows Cloud in action, summons and Limit Breaks and all. There's also an alternate costume based on Advent Children and a special Midgar stage.

A release date for the character and his stage hasn't been announced yet.