Collection will be released in July, 2016 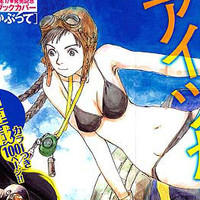 Dark Horse has informed Anime News Network of its plans to release Spirit of Wonder author Kenji Tsuruta's Wandering Island. The collection will be released July 19th, 2016 with eight interior color pages for $14.99.

Wandering Island is the story of Mikura Amelia, a free-spirited young woman living alone with her cat, who operates an air delivery service—flying her vintage seaplane to Japan's small island communities located hundreds of miles out into the ocean. One day going through her grandfather's papers, she discovers an undelivered package with her name on it, addressed to an island Mikura has never heard of. She learns about the folklore among sailors of a "wandering island” in the North Pacific that seems to drift and disappear, spotted at various times over the years by ship's crews. For the sake of adventure, and the memory of her grandfather, Mikura is determined to find it!