There will be cake 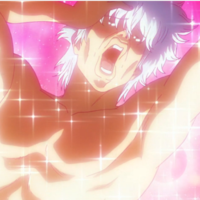 This year, Gintama celebrated the 10th anniversary of its Jump Festa Anime Tour 2005 anime debut and looked ahead to the much hyped Shogun Assassination arc with a new Jump Special Anime Festa 2015 special.  This short has now launched on Crunchyrolll, streaming for premium users as of November 20th and available to free users starting the 27th.

There will be cake.