Next "One Piece" Anime Movie Dated

Series creator Eiichiro Oda is back as executive producer on "One Piece: Gold" 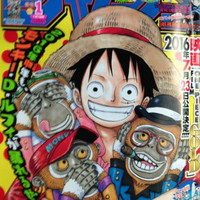 The next issue of Shonen Jump is set to announce that One Piece: Gold, the pirate action series' 2016 anime movie, is scheduled to open in Japan on July 23rd. Series creator Eiichiro Oda is back as executive producer with the TV anime's Hiraoki Miyamoto directing and Tsutomu Kuroiwa (live-action Black Butler, Liar Game: The Final Stage) writing.