"Koyomimonogatari" Short Anime to be Available from January 9, 2016 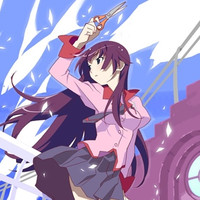 Aniplex today announced that the Monogatari series' official app "Koyomimonogatari" will be available for download at App Store and Google Play on December 19. A new short anime series of the same name will start offering weekly for free via the app, and the 1st episode is scheduled to be posted on January 9, 2016. In addition, a daily pad calendar service with newly recorded voices will be available from January 1.

Three-member anime voice actress unit TrySail, consisting of Momo Asakura, Sora Amamiya, and Shiina Natsukawa, perform the theme song for the short anime, "whiz." It will be released as their 3rd single on February 10, 2016. The unit was formed in December 2014, and previously provided the theme songs for Denpa Kyoushi (1st single "Youthful Dreamer") and Classroom☆Crisis (2nd single "Cobalt").

published in May 2013. The first part "Tekketsu" of the trilogy anime film project based on the series' 2nd