The block almost went for "Lupin III: The Legend of Fujiko Mine" as its new show 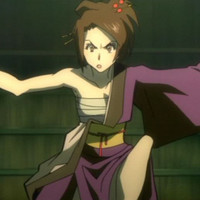 With this weekend's conclusion of its run of Michiko and Hatchin, Adult Swim's Toonami block announced Cowboy Bebop director Shinichirō Watanabe's 2004 Manglobe production Samurai Champloo. The period action remix is scheduled to debut January 2nd. Prior to that, a Dragon Ball Z Kai marathon is lined up for December 19th.

The block almost went for a work by Michiko and Hatchin director Sayo Yamamoto for its new show. The block's co-creator Jason Demarco:

Too many boobies for our censors! We would have had to chop the show to bits. So we chose Champloo. pic.twitter.com/LdLXGsAv1a

PS: Toonami never ran Champloo. Not sure how it will do, but it was cheap, highly requested and it's amazing. Fingers crossed!