VIDEO: "Glitter Force" Trailer Gets Pumped for Its Netflix Debut

Saban's localization of "PreCure" hits the streaming service on December 18 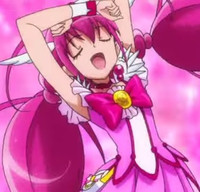 Saban's localization of the Smile PreCure! anime, Glitter Force, is getting ready to make its English debut on Netflix. The 20-episode first season hits the streaming service worldwide, excluding Asia, on December 18, and you can see a preview in the first-look trailer below.

The series' YouTube channel also has a video that goes behind the scenes with all-girl pop group Blush, who provide the theme song, as well as four original songs, for Glitter Force.

Glitter Force is an adapted version of Toei Animation’s successful Japanese anime television series, Pretty Cure (or PreCure). The new series follows five preteen girls who learn that they are a legendary superhero squad known as the Glitter Force and must defend Earth from evil fairytale villains.